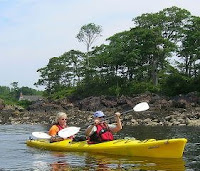 In the past few years the number of companies targeting the female traveler has increased from a handful to thousands!

There are women’s tours out there for every interest from kayaking in the Arctic (burr!) and gastronomical adventures in the outback to high-end culinary tours. When Eurynome Journeys first launched its website www.wanderwoman.com in 1998, there were two or three other companies out there, one was outdoor adventure tours and the other two were more bus type trips visiting crystal and chocolate factories whose groups were as large as 25 women.

I love that women are now more adventurous and traveling! And it is great that here are so many different companies out there catering to us and our interests!

But deciding which tour to take can be a daunting experience.

Below are tips to choosing the right women's tour for you:
For North American women Ireland, and other Western European countries are good places to easy into world travel.
Call or email companies and find out what hotels they use and look them up online. Hotels that are centrally located are best for doing a little exploring on one’s own. If you are accustomed to 5-star properties, you might not be happy in a small local pension. Or if you are looking for a more local experience a pension might be just the right type of accommodation for you.
ASTA tips for female travelers: http://www.travelsense.org/tips/solowomen.cfm
Add your advise.
Posted by WanderWoman Team at 2:58 PM 2 comments:

Wanderwoman isn't the only one to visit Egypt!

CAIRO, June 2 (Xinhua) -- U.S. President Barack Obama is to deliver a landmark speech at Cairo University on Thursday, in his latest attempt to improve the tarnished image of the United States in the Arab and Muslim World and so as to start a new chapter of partnership between U.S. and the Muslim World.

Obama's visit to the Egyptian capital of Cairo, hit headlines on Tuesday in most of Egypt's local newspapers, which all welcomed warmly the upcoming long-waited visit...

Before leaving Cairo at 18:00 p.m. (1500 GMT) Obama will visit archaeological sites in the Pyramids area and Sultan Hassan Mosque...

The [ local daily newspaper Almasry Alyoum] cited Zahi Hawas, the Secretary General of the Egyptian Supreme Council of Antiquities, as saying that Obama would visit the pyramids after his speech at Cairo University.

Hawas said that as a part of his 80-minute tour on foot, Obama would enter the Pyramid of Cheops and visit the nearby Sphinx.

While al-Akhbar local newspaper wrote under the headline "official and public welcoming for U.S. President Barack Obama" that Egypt's government is looking forward to a new page in the relations between U.S. and the Muslim World.

With 319,000 visitors last year, the United States just cracked the top ten list of travelers to Egypt, despite the effects of the global economic crisis and safety concerns.

Tourism was off as much as 14 percent in January, but officials expect the decline to be short-lived because of the treasures Egypt offers...

Most of the Americans I ran into are feeling they are receiving an especially warm welcome mainly because of the recent election of President Barack Obama. His history-making turn as the leader of the free world appears to be so far-reaching that it is touching ancient civilizations.

"The Egyptian people, they love Americans very much and you can see this everywhere," said Dr. Zahi Hawass, an Egyptologist.

"I've noticed since I've talked to people that everyone seems to identify with Obama, and I think because we are on an African continent," said another.

Posted by WanderWoman Team at 10:38 AM No comments: