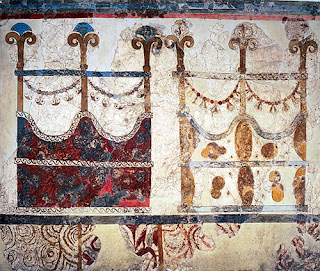 After seven years of being closed to the public, the Akrotiri Archaeological site in Santorini Greece has reopened.  Akrotiri was a thriving community, until it was abandoned just prior to a major volcanic eruption.   This site is one of the most significant bronze ages finds in Greece.
Excavation of the site began in 1967 by Prof. Spyridon Marinatos, since his death in 1974,  Prof. Christos Doumas has been in charge.  Akrotiri was closed in 2005, after the roof protecting the site collapsed.

The  archaeological site was reopened in April 11, 2012.
Opening hours are 10 am to 5 pm daily.
To learn more visit: http://www.santorini.com/archaeology/akrotiri.htm

Image above is  from the Thera Foundation website: http://www.therafoundation.org/akrotiri/ of one of the numerous frescos found at Akrotiri.
Posted by WanderWoman Team at 11:40 AM No comments: