Free Talk: Art and Religion of the Minoans with Art Historian Roger Dell 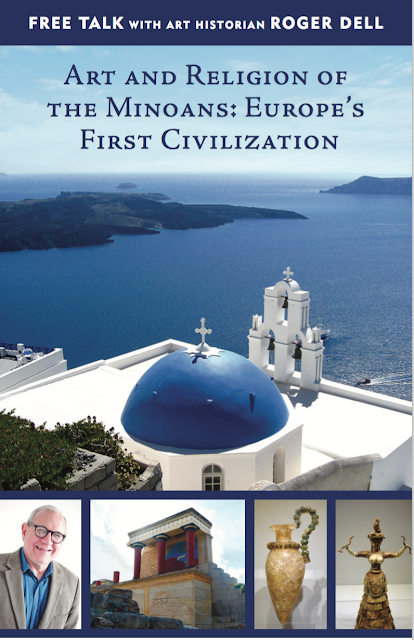 NEW DATE & VENUE
Roger Dell has offered to repeat the Talk on the Art and Religion of the Minoans.  The last talk at the Camden Opera House was a full house.  If you were unable to attend the first time, join Roger Dell at the Belfast Free Library, in Belfast Maine, 6:30-8:00 pm on February 7, 2017 .
The talk will provide an introduction to the aesthetic achievements and ritual practices of the Minoans, a prosperous, seafaring, matriarchal, culture that thrived 3500 years ago on the Greek Islands of Crete and Santorini.   Many scholars believe this highly-advanced society, which suddenly disappeared, to be the source of Plato’s Atlantis Myth.
Roger Dell in an art historian, museum educator and former Harvard lecturer residing in Rockland, Maine. For the past several years Roger was the Director of Education at the Farnsworth Museum, from where he retired in 2016.
Many years ago when visitng Santorini for the first time, Roger and his wife Nancy fell in love with the island. They decided to return and lived in Santorini for a year during which time Roger did research on Bronze Age Aegean civilization for a book he was writing.
During the talk on February 7th, Roger will share his insights about the ancient Minoans and some of his experiences living in Greece.
In May 2017, Roger is leading a tour, organized by Eurynome Journeys, to Santorini and Crete, “In Search of Ancient Atlantis Among the Greek Isles.”
Address:
Belfast Free Library
106 High Street, Belfast, Maine 04915
Telephone: (207) 338-3884
Co-sponsored by Eurynome Journeys and the Belfast Free Library
Posted by WanderWoman Team at 12:58 PM No comments: