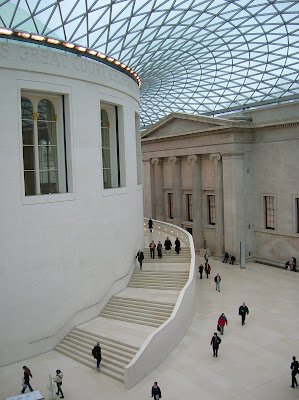 Planning to visit Greece or Italy or some other destination to see their ancient treasures? Well, you may need to visit London, Paris, or some city other than you'd expect.

To learn more about why the national treasures of some countries are dispersed around the world and about "Elginism" visit the links below:

the British Committee for the Restitution of the Parthenon Marbles.


Story about elginsim in the Boston Gobe today:

ON THE FIRST floor of Boston's Museum of Fine Arts, in the early Greek art galleries, there is a long display case filled with Athenian ceramics. In one corner, partway up the linen backing, are two holes, a couple of inches apart, where a shelf holding a small, 2,500-year-old oil flask was once attached. Upstairs, in the Imperial Roman galleries, a group of marble busts and statues has been rearranged after the departure of a 6-foot-tall marble statue of the Roman empress Sabina. Ten Greek pots and one carved marble fragment from Imperial Rome are also gone from the museum's collection.

All the pieces were given to the government of Italy, and are now part of a blockbuster exhibition, in Rome's Quirinal Palace, made up entirely of pieces alleged to have been looted and smuggled out of Italy. The show's title, "Nostoi" - from a lost epic poem recounting the perilous homeward voyages of Greek heroes after the Trojan War - is a nod to the labors of the Italian culture ministry and police, whose campaign of persistent arm-twisting, public criticism, and criminal prosecution secured the return of the 68 artifacts in the show, each now the property of the Italian government.

These returned objects are only the most visible recent fruits of a powerful movement aimed at moving some of the world's most prominent ancient treasures from the hands of foreign museums and collectors back to the so-called source countries. Along with Italy, the governments of Greece, Guatemala, El Salvador, Peru, Turkey, China, and Cambodia, among others, have pushed to reclaim prized artifacts from collections around the world.

They have tightened their laws governing the export of antiquities or intensified the enforcement of existing laws and international agreements; they have made impassioned public cases on the world stage.

These governments argue that to allow such objects to remain abroad as trophies only encourages the continued pillage of their national patrimony. Their position has won broad moral support and increasingly become the norm among academic archeologists, who see ancient objects as historic artifacts inseparable from their place of discovery. It has forced major concessions from great museums around the world, including the MFA, the J. Paul Getty Museum, and the Metropolitan Museum of Art in New York. The British Museum is under persistent pressure to return the Elgin Marbles, its famous set of sculptures from the Parthenon.

Posted by WanderWoman Team at 8:11 AM

You can find a more detailed definition of the word on the href="http://www.elginism.com/definition/">eponymous website

Thank you! When posted the site www.elgism.com was down... Glad it's back up!

I have read about this subject and everything should be return to those countries. Peru is one of them. This country has a wide range of tourist facilities. Last year I came to this country through the travel agency TurPeru and I could knew a lot of cities that has great stories. If you can travel to peru , if you want more information enter to www.turperu.com.pe